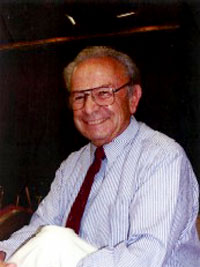 Calling hours will be held at Cummings Funeral Service, Inc., Watertown on Thursday, June 6, from 9:30 - 10:30AM followed by the funeral service at the funeral home at 11AM with Rev. Jerome Wichelns and Rev. Pierre Aubin officiating. Burial will be in Glenwood Cemetery.

Mr. Del Borgo was born in Port Chester on October 27, 1938, son of Anthony and Mary DeSanctis Del Borgo. He held a B. S. degree from the State University of New York, an Ed. M. degree from Temple University, and an M. M. degree from the Philadelphia Conservatory of Music, where he studied theory, composition, and trumpet. In 1973 he was granted the doctoral equivalency by SUNY, and was elected to membership in the American Bandmasters Assoc. in 1993.

He taught instrumental music in the Philadelphia public schools. From 1966 to 1995 he was professor of music at Crane School of Music, where he held teaching and administrative positions. He was an internationally known conductor of bands and orchestras. As an award-winning member of ASCAP he was a frequent consultant, clinician, lecturer, and adjudicator in the US and abroad. He also wrote the Closing Ceremony music for the Olympics in Lake Placid in 1980 and had published over 700 compositions for a variety of media. His energetic and firm, but humorous style was well loved by his students and fellow musicians.

Mr. Del Borgo was a member of both St. John's Episcopal Church, Cape Vincent and St. Nathaniel's Church, North Port, FL. He enjoyed gourmet cooking of the ethnic variety, art museums, and traveling to Europe. He was a volunteer ambulance driver for the Cape Vincent Ambulance Squad.

Donations in his name may be made to Sandy Hook Promise, PO Box 3489, Newtown, CT 06470 www.sandyhookpromise.org. Online condolences to the family may be made at www.cummingsfuneral.com.