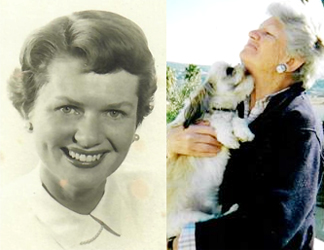 Betty Henrietta Boyd Cummings Major-Stevenson died on August 16th, 2020, 99 years and 8 months after she was born in Ardmore, PA on December 31st 1920.

Living into her one hundredth year, Betty spent her youth in the USA (40 years), her married years in the UK (30 years) and her retirement in France (30 years). She lived a long, interesting and entertaining life. She was born during one pandemic (the Spanish Flu) and a hundred years later died during another (Coronavirus) and neither killed her!

She spent her youth surrounded by the large Cummings family in Clayton, NY from 1920-1960. She met her English husband, Antony Major-Stevenson crossing the Atlantic in 1959 and married him in Northern Ireland in 1960 before they settled in Sturton-by-Stow, Lincolnshire, England for the next 30 years from 1960-1990, with their daughter, Ann Boyd, born a year later. For their retirement they moved to France in 1990 where they enjoyed the company of many international friends until Antony (known to the family as "Steve") died in 2005. Betty stayed on at their home in Savignac-de-Duras, France by herself until Ann joined her a few years later to keep her company until her death in 2020.

Sadly Betty's mother was killed by the global pandemic of Spanish Flu (1918-21) two and a half months after Betty was born. Unable to look after her by himself her father, by then a Philadelphia policeman, gave her to his mother, her "Grandma" Frances Collins Cummings (Canadian, migrated from Kingston, Frontenac County, Ontario, Canada and naturalized), wife of Milo Cummings (from Cummings Point, Grindstone Island) and his brother her "Uncle" Morton Solomon Cummings (born on Grindstone Island) to bring her up in their home at 512 Webb Street, Clayton, NY.

Despite technically being an "orphan" and a "ward of New York state", Betty grew up in the loving care of her extended family, playing with cousins, sisters Audrey and Barbra Ulrichs (daughters of "Grandma" Frances" youngest child Dorothy Sarah Cummings Ulrichs (born on Grindstone Island) and Andrew Ulrichs, when they came to visit from their home in Syracuse; along with her Clayton school friends Cornelia Henry and Mary McCarthy amongst others. She shared the Webb Street home, which was the "Cummings Villa" guesthouse, with “summer visitors” and benefitted from the generosity of "Uncle Morton's employers the Rose family from Binghamton and Round Island, the Morgan family on Papoose Island, and the Crumb family on Bluff Island. Mrs Rose, in particular, gave Betty the most beautiful hand-me-down clothes so she was always well dressed!

Once her father Ernest remarried (to Zoe Kline) it was intended that Betty be brought up in his family along with their daughter, her younger half-sister, also called Zoe. However Betty, at the age of 4, insisted on staying with "Grandma" and "Uncle Morton" in Clayton.

Betty graduated Salutatorian circa 1938 from Clayton High School (the precursor to Clayton Central School and Thousand Islands High School). All the way through high school Betty ended each year as Valedictorian; however in her senior year Cornelia Henry's family moved to Clayton and Cornelia pipped her to the top honour for Graduation! Despite that they remained lifelong friends. Betty always said that she wanted to work hard and do well to repay "Grandma" for looking after her.

Sadly around that time in 1938 "Grandma" Frances died (aged 69-70) from bowel cancer and Betty and her "Uncle Morton" moved from Webb Street into a smaller house at 511 James Street.

She went on to Albany State Teachers' College, from where she graduated with a BA in Secondary Education circa 1942. She carried on with her education, intent on teaching, and attended Syracuse University where she gained a Master's Degree in English Literature in 1946.

Her career as a teacher started and she taught in the Freshman English Department at Syracuse University, along with her friend Alan Arnold, between 1946-1950. For the next decade from 1950-1959 she taught English and drama at North High School, Syracuse.  Her "Uncle Morton" died on 31 March 1958 at the Syracuse Veterans Hospital and this prompted her to take a trip to visit Europe the following year in 1959.

Whilst crossing the Atlantic on the Cunard ship "Media", she met her future husband Englishman Antony Major-Stevenson. It was a whirlwind courtship and after a short long-distance romance they became engaged and were married in Ballymoney, County Antrim, Northern Ireland in the home town of her deceased Irish mother Anna Maud Boyd. She was given away by her mother's sister, her Aunt Andrewina ("Ena") Boyd Gilmour. Despite leaving the USA, Betty kept in close contact with all her family and friends from Clayton, Albany and Syracuse and with cousins as far afield as California. She brought-up her daughter, Ann Boyd, born in 1961, to appreciate and know all about her American heritage. Cards, letters and parcels arriving from the USA for birthdays and Christmas were greeted with great excitement and the annual ritual of writing Christmas cards to send to America started in October!

Lifelong friends Betty was fond of from her time in Clayton, Albany and Syracuse included, but were certainly not limited to: Marjorie ("Marge")* and Charles Wingerath (Clayton), Cornelia* Henry Schnauber (Clayton to De Pauville NY), Malcolm and Virginia Marsden (Elmira), Martha Sullivan Slattery (Baldwinsville NY), Marcia Evans (Syracuse) and her Cousins Robert L ("Bob") Cummings in Houghton, and Donald M. ("Don") Cummings in San Bernardino CA and her half-sister Zoe in Millersville PA.
NOTE* Marjorie graduated Valedictorian from Clayton High School in 1939 the year after Cornelia and Betty graduated Valedictorian and Salutatorian respectively. They were a very bright group of girlfriends!

Betty's stories about her youth and the characters in it, were always Ann's favourites. Such as the time Betty was at the Clayton railway station and saw the gangster Al Capone arrive surrounded by his lawyers!

In the UK, Betty was unable to get a teaching position as the local school board believed that she wouldn't stay because she kept her American citizenship. Consequently she occupied herself with a variety of part-time jobs, charity fund-raising, hosting fabulous dinner parties to support Antony in his work as an International Engineering Salesman, and was an exceptional cook, baker, knitter, sewer and homemaker.

When it was time for Ann to go to college, in 1979, Betty arranged for her to attend Houghton College, Houghton, NY in the care of her cousin Professor Robert L Cummings. Whilst there he took Ann to meet one of his brothers, Miles A. Cummings, and two sisters Arlie Cummings Gorman and Marjorie Cummings Johnson, in Clayton.

In 1990 Betty and Antony moved to Savignac-de-Duras in south-west France for their retirement. They thoroughly enjoyed exploring the area with international friends, practicing French, sampling the local produce and wine! Betty acquired a little shih-tzu puppy she called Taco and her happiness was complete. Fifteen years into their time in France, in April 2005 Antony died suddenly of a heart-attack. Taco, and their cat Tabithe, kept Betty company and she happily stayed on in France by herself until 2012 when Ann joined her.

After both her animals had died, Tabithe in 2015 and Taco in 2016, Betty was bereft and wanted another animal. As she was then 95, Ann decided that fostering would be the best way forward and for the last four years of her life she and Ann fostered for a local animal charity (until they were adopted) a small dog, three mother cats, their 13 kittens, 7 orphan kittens, a male cat that could open doors and another that had been shot in the eye!

In her final weeks Betty decided that she wanted to be cremated and repatriated to spend eternity with her "Grandma" Frances and "Uncle" Morton at home in Clayton, NY.

She died at home in France in her bedroom, overlooking her rose bed, on the morning of Sunday August 16th 2020 with Ann and her cat Angele (the foster cat they did keep) by her side.

On Friday August 21st 2020, under Covid restrictions, a small funeral service attended by local friends was held in the Catholic Church (the only church) in Savignac-de-Duras, once Ann was able to reassure the presiding priest that the Episcopal Church is descended from Catholicism (via the Protestant Reformation) and thus Betty could have her funeral service there. This was followed by her cremation in Bergerac, France.

She is being interred at Clayton Cemetery, 1021 James Street, Clayton, NY 13624, with "Grandma" Frances and "Uncle Morton" on Monday, September 13th, 2021 at 11:00 AM. There will be a short interment ceremony with an Episcopalian blessing by Rev. Jack Anderson to which all who wish to attend, particularly Cummings relatives, no matter how distant (!), will be welcome.

It will be followed by a "Commemoration and Fellowship Refreshment" afterwards at The Harbor Hotel, Clayton from noon to 1:30 PM.