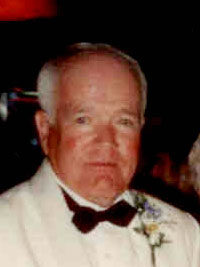 Jack, son of Edward J. and Harriett L. Sullivan Connolly, was born in Watertown on April 29, 1921; he attended Watertown schools.

On July 22, 1942, he entered the United States Army. He served with Battery B, 269th Field Artillery Battalion in Ardennes, Central Europe, Northern France, and Rhineland. During his service, he fought in the Battle of the Bulge. He received the Bronze Star Medal as a radio operator for headquarters battery of the 101st FAB, 26th Division near Wolfgang, Germany, during action on March 27, 1945. He also received the American Service, European African Medal Eastern Service, Good Conduct, and World War II Victory Medals. He was honorably discharged as a Technician 5th Grade on December 3, 1945.

From 1959 to 1990, Mr. Connolly was a licensed certified plumber, owning his own business, Connolly Plumbing. He was also employed as a machinist at the New York Airbrake. Jack was a communicant of Holy Family Church and a former member of VFW Post 1400. He was a member of the local Plumbers Union, the International Assoc. of Machinists, and the AFL - CIO.

One of Jack’s greatest passions in life was golf. Together with his son, he was able to attend the Masters: a memory he always treasured. He was also an avid supporter of Syracuse University Football and a long-time season ticket holder. Some of Jack’s happiest times were spent with his family by the St. Lawrence River, as they watched the ships pass by. He also enjoyed supporting his grandchildren’s sporting events and extracurricular activities. Above all else, he treasured his family. His compassion and values were instilled in his children, as they cherished the time spent during every lunch and dinner with him during his days at Samaritan Keep Home.

Calling hours will be held at Cummings Funeral Service, Inc., Watertown on Wednesday, June 5, from 4 - 7PM. The funeral mass will be celebrated at Holy Family Church on Thursday, June 6, at 2PM with Rev. Steven Murray officiating and burial, with military honors, will follow at Glenwood Cemetery.